By Terraria (Free to try)
Version: 1.4.4
Clean
This file has been scanned with VirusTotal using more than 70 different antivirus software products and no threats have been detected. It's very likely that this software is clean and safe for use.
View full report in
VirusTotal
SHA256:

Terraria for Mac is a two-dimensional online sandbox game with a procedurally generated world, beautiful 8-bit landscapes, and all the features of an actual sandbox, such as building, crafting, exploring, digging, and battles with monsters.

A team of three people created the project for six months, and 50 thousand copies were sold on the first day of release. A week later, more than 200 thousand people played the game, and then the number of players increased. Terraria remains one of the most popular indie sandboxes. We will tell you more about this game.

What is this game about?

Terraria for Mac allows you to create a character but doesn't set any characteristics except appearance. Then it generates a new game world, and you suddenly find yourself in the middle of a wild steppe. On the left, there is a low hill. On the right, there is a deep cave with unexplored depths. Your hero has just two tools, an ax, and a pickaxe, to build the future. It's up to you to decide what variant of the future you want to see.

Terraria is a game about freedom. It sets no limits except for time: clear day is soon replaced by the dark night, and zombies and flesh-eating flying eyes crawl out from somewhere, so you'd better have shelter by nightfall. To build one, you need to obtain building materials, cut down trees in the surroundings and dig up stones from the ground. When the first house is finished (you need to build it yourself, laying out brick by brick), it turns out there are many things to do. For example, you can make a workbench from wood and create new tools, weapons, and finishing materials there. Or you can put an anvil in your house to change the feeble wooden sword into a steel blade and put some armor on your shoulders. Remember that the world around you is unsafe because monsters follow you both in the tunnels and upstairs.

All the events begin with a sword and first armor because most exotic things await the lucky hero in the depths of Terraria. You can find a blade that summons starfalls on the heads of your enemies and then collect a working blaster and a real lightsaber. You can find numerous pieces of equipment in the underground scraps of Terraria. There may be even more equipment over time. The developers, as respectable indie developers, take the wishes of gamers into account.

The gameplay in Terraria for Mac is built on classical mechanics: you need to dig resources, craft items from them, and dig again to get something new. Areas are vast and have many biomes where you can find everything you want, including rubies, jars of gold, plantations of mushrooms, and monsters...

If you don't want to become prey, you need to equip weapons, such as blasters, lightsabers, muskets, and so on. Moreover, valuable resources can fall out of monsters, so don't forget about hunting.

The game has a cooperative mode for up to 8 players — the complexity increases in direct proportion. You can also enjoy team battles, but you'd better not get into them without experience in cooperative games.

The absence of any goals is the most pleasant advantage of Terraria. The most excellent attention is paid to the process but not the result. Some people like construction and want to build a huge mansion where many healers and traders will appear soon, and some enjoy digging. Some are delighted by the uncomplicated combat system, similar to classic platformer games.

The player may encounter various enemies, and the appearance of certain enemies depends on the time of the day, the location of the game character, random events, the player's interaction with the game world, and so on. Slugs are most common in the daytime, and zombies and demon eyes appear at night. At the beginning of the game, the character has a short copper sword for protection against monsters. Later, the player can find or create various weapons, such as swords, bows, firearms, magic books, wands, etc.

In the latest stages of the game, the character can choose a particular class and use some weapons and armor more effectively. Depending on the type, the character can fight the enemies in close combat, shoot from a distance with a gun or bow, and use magic or summon friendly creatures fighting on their side. The Blood Moon can appear at night. It is an event when many enemies appear, attacking the game character in the open area and breaking into the buildings. The player can summon bosses and get rare items, trophies, and coins for fighting them. A boss can appear in the game when using a particular item, destroying special blocks, or providing certain conditions.

A unique set of different creatures in appearance and combat inhabits each biome. The player encounters various bosses as the character develops, such as the Eye Of Cthulhu, the Skeletron, and the Eater of Worlds. The player can go to underground caves, stretching to the Underworld, summon and defeat the Wall of Flesh boss to make the game go into the hard mode with enhanced versions of existing enemies and non-playable characters, bosses, minerals, and items. After that, the player can fight other bosses, including Plantera, Golem, and the Moon Lord, the game's final and most complicated boss. New bosses, Queen Slime and Empress of Light appear in version 1.4.

The entire game is built around shuttle mechanics: you should run underground to get new materials, create something new, and rerun underground. There is no final goal, just a process of exciting exploration of the world and your possibilities. Hunting for rare minerals or raids into dark caves to find the magic wand that occasionally falls somewhere behind a rock is what the player can do in Terraria for Mac.

Everyone can find everything they need here. Those who are more interested in building than digging in the ground can build a three-story mansion on the surface to attract merchants and healers, ready to offer their help when needed. Those who are fond of digging can also find something interesting. The worlds of Terraria are vast, and there are even more exciting things hidden underground than above. Even fans of action RPGs will be satisfied: 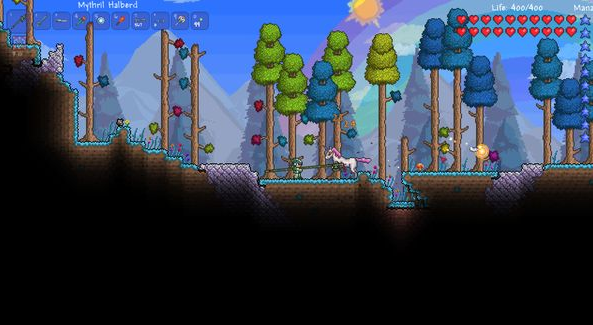 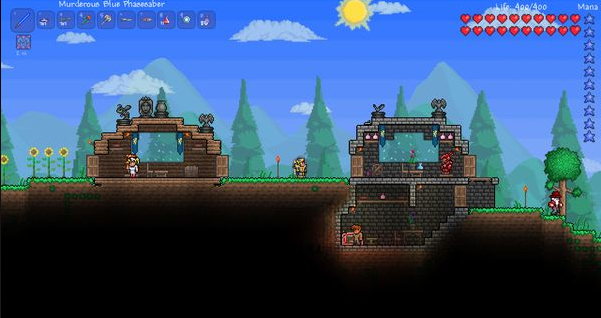 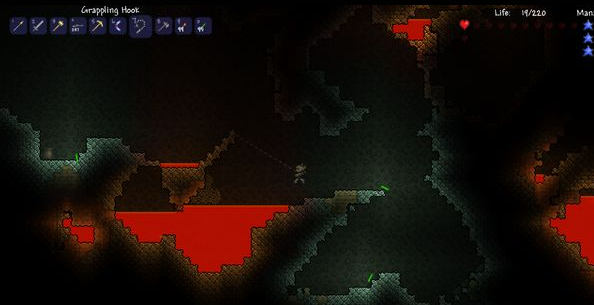 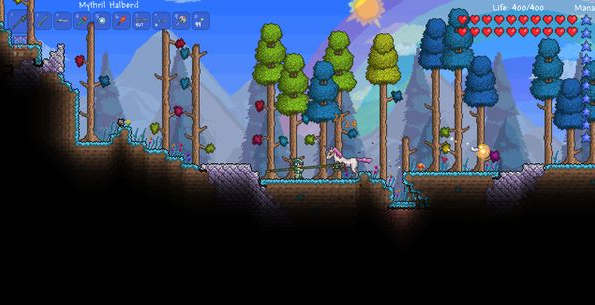