Earn to Die 2for iOS

By Not Doppler Pty Limited (Free to try)
Version: 1.4.17
Clean
This file has been scanned with VirusTotal using more than 70 different antivirus software products and no threats have been detected. It's very likely that this software is clean and safe for use.
View full report in
VirusTotal
SHA256:

Earn to Die 2for iOS

By Not Doppler Pty Limited (Free to try)
Rating
4.7
Download for iOS
Advertisement

Combining racing with a game about zombies is a very original and unusual idea, but the developers of Earn to Die 2 for iOS succeed. We will tell you what this game is.

Earn to Die 2 is the sequel to the game of the same name about a survivor escaping from the hordes of zombies who are just trying to eat a tasty lunch. Unlike its predecessor, the second part has a significant advantage: it is free to download. So now the possibility of driving a car and escaping from the cannibals has become even more expansive.

The primary idea is simplified as much as possible, but this does not spoil the game: it turned out to be exciting, tense, and full of drive. There is a world where the apocalypse took place. There is a surviving hero who is trying to escape from the zombies. He catches a TV signal and listens to a warning from the military: all survivors urgently need to arrive at the Sanctuary port to evacuate from the infected area.

The military warns that time is short, and the evacuation ship is leaving soon! Your hero needs to get to the destination as quickly as possible. To do this, he takes his first car and begins his adventure through zombie-filled streets. It will not be easy because cannibals do not sleep, and it is also necessary to change the vehicle on each track and improve it. Otherwise, you can not go far away.

You can see a map showing the route; the Sanctuary port is the final destination. Each track the hero must travel on is a level. There are ten levels in the game. The player's goal is to drive different cars along the entire route in the minimum number of game days and to successfully break through obstacles and crowds of zombies, upgrading vehicles for this purpose.

The game features ten cars according to the number of levels. It would be best if you upgraded each of them to withstand zombies and overcome obstacles. The cars can be upgraded for money earned by the trip results. Your vehicle has the following details:

In new stages, you won't be able to use cars from the previous stages. They will be replaced by other, more powerful ones (but you will still need to upgrade them). However, the farther you drive, the more money you earn, so upgrading your car to the full shouldn't be difficult.

When you open a car in the garage, you see a list of its parts with their improvement scores. If all the improvement units are complete, the position will be improved to the maximum, and the appropriate mark will appear above the part. If the improvement unit is not entirely filled, the price of one upgrade unit will be displayed above the part. The cost of the following upgrade becomes more expensive with each improvement of the part. A weapon is the only exception. Its first upgrade will be costly, and subsequent upgrades will be cheaper.

There is no prioritization of details in Earn to Die 2 for iOS. All parts are connected, so you need to improve each one. Thus, no items in the car need to be upgraded as a priority. They all have equal importance, and none gives a competitive advantage. Even if you have excellent armor, you're unlikely to be able to climb a mountain with a weak engine and wheels. Similarly, a full fuel tank will not help you fight the pursuing zombies if the car is not equipped with weapons and has no armor.

Each track has three stages: refueling stations. At the first two, you fill up your car, and at the third, which is at the end, you get a new car for the next stage. You can track your movement on the scale at the top of the screen. According to the stages, refueling stations are marked there, as well as the final destination of a particular route where you get the next car.

An orange triangle indicates your location. This is the maximum distance on the track you've covered so far. Thus, you can calculate how far you have left to travel and when the next refueling station will be on your way.

The amount of ammunition for your weapon is displayed in the upper left corner of the travel screen. One bullet per zombie is expended.

As you can see, the interface is relatively straightforward, especially for mobile devices. Due to this, almost any beginner can understand the game and enjoy it. 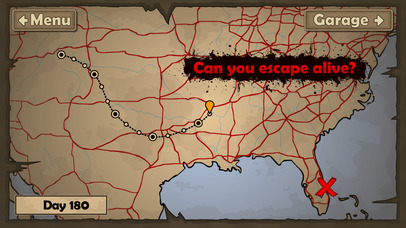