You're just one tap away from becoming the next Beckham

Score Hero for Android is a mobile football simulator designed vertically. It differs from other simulators because you must pass the goals and play the ball independently. You can pass a fascinating way of a football player's career with one of the team members, even a goalkeeper. Each incredible victory can be automatically published on your social networks so your friends can appreciate your efforts.

At the beginning of the game, you should choose the appearance of your football player. It is not essential for performing tasks, but the developers allowed football fans complete immersion in the gameplay to decide what their players would look like. Unfortunately, it is impossible to customize the football player; you can just select one of the existing options.

Once you have chosen your character, you must pass a short tutorial to learn how to pass, attack, and score. After that, it's up to you to decide how to play, outsmart your opponent, and score a goal. The game offers various ways to win; you only need to find your way and implement it on the field. Your footballer becomes popular gradually. He joins multiple teams, signs contracts, changes clubs, and earns a lot of money.

The entire game is split into seasons, and the seasons are divided into levels. For example, you must score from a particular position at the first level, pass and score after that at the second level, etc. The options gradually become more versatile, and the opponents become smarter. It will be impossible to pass in front of your opponent or score in the bottom corner right next to the goalkeeper. It would be best if you had unique tactics, the ability to control your display correctly, and football knowledge. The exciting levels make you think about every step, develop your skills, and more. The game also has a storyline.

There are 32 seasons in the game. You have to play a certain number of matches in each season. At the beginning of the game, you can select any team player, such as a defender, striker, or goalkeeper. You also need to choose a name for your character and lead him through all the seasons. After the second match, you should select 1 of the 3 proposed clubs interested in your player.

Each match has 3 tasks: scoring a corner or passing to a teammate. If you complete a task correctly, you go to the next level and participate in the next game.

For example, a "score a corner" task must be completed from the first attempt, although there may be several attempts. If all 3 match tasks are performed from the first attempt, the player gets 3 stars. The number of stars also affects the transition from one season to another. For example, you need 32 stars to go to season 2. If you don't have enough stars, you can replay some matches.

Important information about your opponent appears at the bottom of the screen before each match. Please do not ignore it because the final of the match depends on your actions and your opponent's actions. After 10 played games, you will get a new menu where you can change the equipment of your player, select his appearance, etc. You can also choose a number for your T-shirt.

The interface of matches

You can change the scale and location of the camera during a match. This is convenient and necessary to assess the overall situation on the field. You can pass or score a goal more accurately if you zoom in.

Viewing the field is very important in the game. How you behave in a specific situation, view teammates and opponents, and pass and score a goal affects the successful passage of the entire game.

Every time you pass the ball, the artificial intelligence adjusts to your kick, and your teammates and opponents try to run up to the ball and kick it. As soon as your teammate takes the ball, you must continue the combination with that player.

After each successful match, a famous sports newspaper will write an article about your footballer on the front page (for example, "Young player shows great promise"). During one of the seasons, the tabloids will discuss the confrontation between two athletes: an experienced football player and a young talent.

Score Hero for Android has unique game mechanics that differ from similar games. During matches, players move around the field on their own. Your footballer enters the game at the most difficult moment when it is necessary to implement the created potential in the area properly. The game is designed so there is a way out of each critical moment. The ability of the player to find it depends on practice.

There are several ways to pass the ball to your teammate or score a goal:

When passing the ball to your teammate, it is necessary to look at the formation of the opposing players: where they run and how they place their legs and body. This is important so that the opponents do not intercept the ball.

Each level in the game is a particular situation that occurs on the football field, most often at the goal of one of the teams. The player needs to assess the situation correctly, cut around his opponent, pass to another player competently, and kick the ball into the goal. The game is controlled using intuitive swipes. To pass a ball or kick at the destination, it is necessary to "swipe" the ball in a specific direction and with a certain force. After each pass, time in the game stops to allow you to think about your further actions. This slowdown greatly simplifies the completion of levels and makes the events on the screen more spectacular.

Your character will get additional skills from time to time. For example, you will get the "quick recovering after attacks" skill after the last match of season 1. This means that your kicks will be more accurate, and you will be less tired on the field. The skills a player gets are displayed on the main screen next to the levels.

After receiving the "Captain" rank, the player can allocate opponents to pass the ball to them (the selected player responds to the pass). This feature helps a lot during the match. The player reacts better to the situation and can build a scheme of attack and defense.

The developers decided not to go deep into the donation. It is impossible to buy an experienced footballer, get some bonuses during the match, and so on. You can twist a moment one step back for real money. For example, if you kicked on the goal inaccurately after five accurate passes and didn't want to pay, just start playing the level from the beginning. However, you spend energy for each pass, so you must wait or pay for energy with real money when it runs out. These are all the in-game purchases.

The game has unique mechanics for correcting mistakes you've made. Dollars are an in-game currency that allows you to rewind an unsuccessful moment of the match to replay the attack. Dollars are earned during your career. The higher the footballer's team is in the league, the more currency you can make. You can also purchase dollars for real money or for watching ads.

The game also has "hearts." Each match has a certain number of attempts to replay a dangerous moment. When a player mishandles an attack or does not score a goal, 1 attempt is spent. A total of 5 hearts can be expended per match. Don't forget that passing and kicking at high levels is difficult because there will be different game moments in every match.

Score Hero for Android is an interesting and exciting game. It can help you practice combinations of world-famous footballers. Graphics and innovative system actions are also pleasant. If you like football and want to approach it from a position of unusual but exciting gameplay, you will like this game. 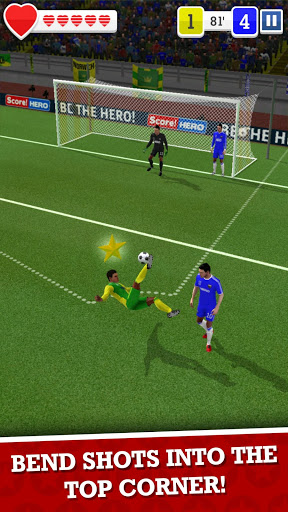 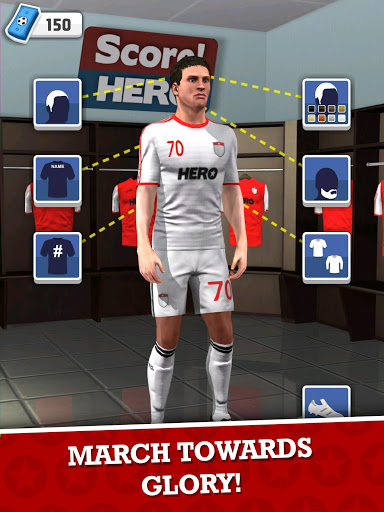 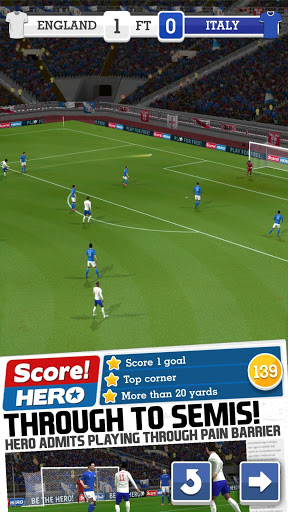 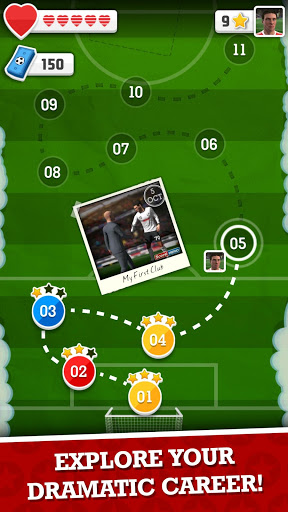 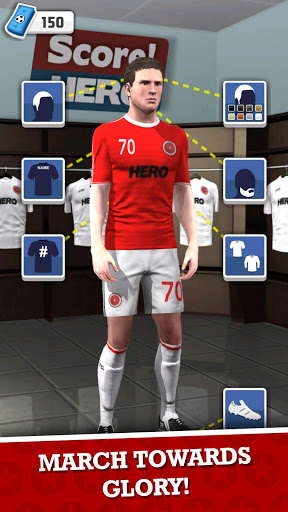