An excellent game for racing fans

Do you like racing and speed? You can fully satisfy your needs with Asphalt 9: Legends for Android. The Gameloft studio has always known how to create mobile games, and their skills have not disappeared in this case. This game is also available for mobile devices so we will tell you more about it.

Asphalt 9: Legends for Android focuses on racing. Your goal is to win every season of racing. Fortunately, you don't need to fight for the first position in every race. Moreover, you must run away from the cops to win the fight for the best score or perform various fantastic tricks. There are many ways to keep you moving in the game.

There are many options, such as upgrades to improve the controls and speed of your car, blueprints to get new rides, and unique events, available at regular intervals. Asphalt 9 does a great job of making you feel the actual progress with each session of this game.

In Asphalt 9, even the most minor details, like the dust under your tires, look incredible. Racing in Asphalt 9 for Android will take you from the snowy Himalayas to sunny Cairo with ancient Egyptian pyramids in the background, as well as to Chinese Shanghai at night and to the American Midwest.

The game quickly moves between these levels, mixing the length of each race and the obstacles you have to face, such as falling rocks in the Himalayas or giant tornadoes in the United States. There's always something new in this game to grab your attention.

The control option, Drive, is a primary new feature. It allows you to scroll through the screen. Touch Drive will help you determine the direction of your vehicle and avoid obstacles, jump ramps, or collisions with your opponents along the way. In contrast, the vehicle's turns and acceleration are controlled automatically. For example, you just need to tap on the screen to increase speed or perform tricks.

There are also fine-tuned control alternatives, such as the Tilt to Steer function that uses your smartphone's gyroscope to control your car or the Steer function with virtual buttons. These features make Asphalt 9 more accessible to those who don't want to fuss with controls in case of multiple turns of each race track.

There are various modes in the main menu: a single-person career, online races, and special events. In the single-player game, you must get away from the police chase, defeat your opponent in a "duel," pass the track on time and participate in a classic race. There are also additional missions at some levels. You can get more money and blueprints for new cars for completing them. The career mode will drag you out for a long time.

Multiplayer mode allows you to show your skills and compete against other real players. After each successful race, your rank increases so you can move to a new league. The higher your league is, the more valuable bonus you can get at the end of the season.

There are four game modes in Asphalt 9: career, online modes, daily promotions, and seasonal events. In career mode, the player has to go through several "chapters."

Each consists of different races designed for cars of certain manufacturers or classes. In online mode, players compete in real-time. Daily promotions usually last from a day to a week. These are competitions between players for the best time on the track. Seasonal events typically last from 10 days to a month. They are primarily designed for new cars or replays of old vehicles. Seasonal events include Grand Prix. It is a battle between 20 players for the key to the car. Drive Syndicate is a 28-day event designed for 1 leading car and 5 additional vehicles. Starway is a replay of the car for those who didn't take it earlier.

The gameplay is very dynamic in this game. You will not have a second to get distracted. Drift on turns, knock down your opponents in epic slow motion, and perform various tricks. All this will speed up your car. You can go on ordinary nitro (you need to press the acceleration button twice when the indicator is in the blue zone) or on the Nitro Pulse (you need to quickly press the acceleration button 2 times with a full nitro indicator). All maps in Asphalt 9 for Android are stunning and detailed. You can visit various places, from the Himalayas to Shanghai. Once the race is complete, you can review it and take beautiful screenshots due to the free camera.

A great choice of vehicles and car tuning

The choice of cars is enormous: there are 89 cars in the game! You can find almost any sports car, even Chevrolet Camaro and Bugatti Chiron. You can change any car according to your taste. Don't you like the color? You can change it to any other color. Don't you want the current spoiler? No problem, as there are many options to choose from. Some cars can even be tinted with your own color!

You need to get the blueprints and improve the cars to pass the missions. There are several ways to get the blueprints: to get them for special events, buy them in the store separately or in sets of maps, and successfully pass races in career mode. The more cars in the garage and the more upgrades they have, the higher the garage level is. At higher garage levels, you may find better vehicles in the sets of maps than at the beginning.

The soundtrack is an integral part of the game. Asphalt 9 for Android has fantastic music that fits perfectly in the gameplay. The music is calm and quiet on the menu, and in the races, it is energetic and dynamic. The composers did their job well because many players will approach these soundtracks.

Today, Asphalt 9: Legends for Android is the best mobile game for racing fans. It has the best features of this genre: dynamic races, detailed graphics, excellent music, and easy controls. The game also supports GPU Turbo technology and is compatible even with cheap smartphones. 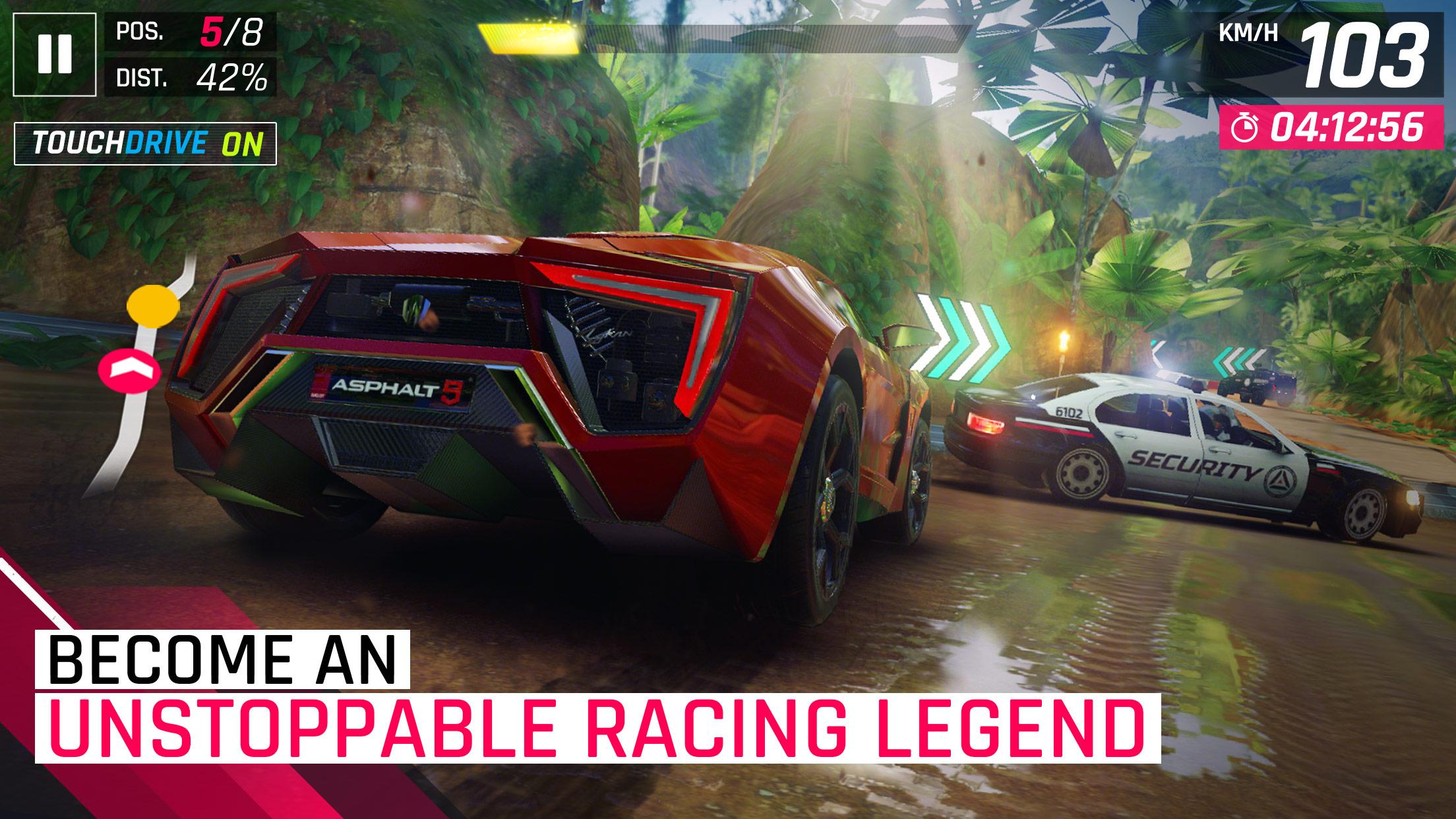